A huge thank you to Disney and Pixar for inviting me to the world premiere of Cars 3 and to experience this amazing opportunity.

I recently had the opportunity along with 24 other amazing Bloggers to interview Larry The Cable Guy, Nathan Fillion, Lea DeLaria, and Isiah Whitlock Jr. from the movie Cars 3. I’m don’t think I’ve laughed this hard in a long time. Checkout what the cast had to say regarding improv, mentor’s and so much more.

Was improv used while recording?

Larry: Well I always do improv my opening line I did in Cars was “my names” Mater like Tomato without the To,” Then Larry asked the director if he could do it another way and this was the response he received “No, do whatever you want, as long as you’re staying close to the script” From there Larry added his twist to script.

Nathan: When I try to do improv they always tell me “That’s great, stick to the lines.” (The room exploded in laughter)

Isiah: I always say look I am just going to start talking, cut me off when you’re ready to cut me off just tell me to stop, okay? 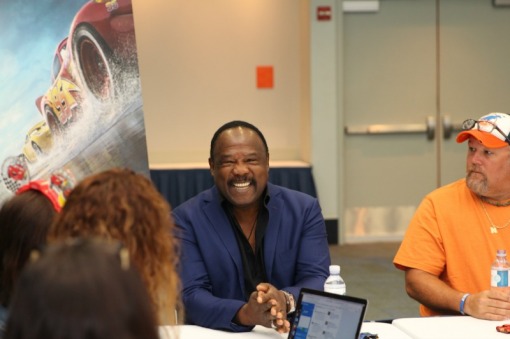 Isiah, I watched you in the tv show “The Wire” How did it feel to do something different?

Great! I always jump at the chance to do something different and when this opportunity came along, and I was just thrilled about it. I was in the booth by myself with my imagination, and I found it quite liberating. I can always find something about the character that’s gonna be interesting, and that’s what I try to do.

Nathan, I read something in a different interview where you’d described Sterling as “charming.” could you explain that?

Nathan: That’s fair, that’s fair. I always find that charming is one of the more misleading directions when you’re reading a screenplay or a script. People see “charming, ” and they go skeevy, and a little weird. Charming people are not so much interesting as they are interested. They’re saying, “Hey. You are great. You are beautiful. You are the best.” But, in this case, as a businessman first, I think he puts Lightning McQueen into a “you are the best, you are the greatest, but I do have an ulterior motive.” So, I think that’s where it gets a little skeevy. 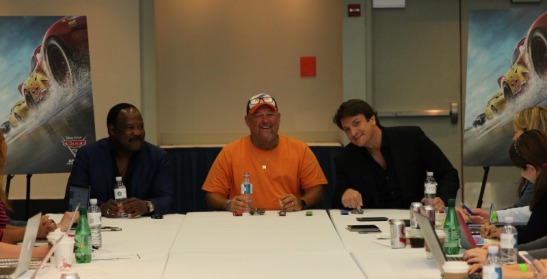 Nathan, you’ve played some memorable characters on TV, and you’ve also voiced some characters. What do you think your favorite part about Sterling is? What interested you in this opportunity?

Nathan: I’ve been to the Pixar facility twice, watched every Pixar movie and I’ve seen the Pixar documentary four times. I am into Pixar! Nothing happens in a Pixar movie by accident. They tell the story, one pixel at a time. It’s very, very careful filmmaking and it’s very methodically planned out, and to be a part of it, you know you’re going to be a part of a story well told, and it’s going to be beautiful, and it’s going to last. I will do anything for Pixar. (We all exploded in laughter as Larry and Isiah joked with Nathan)

Who are some of your mentors, either professionally or personally?

Nathan: Bob Woods who played my uncle on “One Life to Live” I wouldn’t have moved to Los Angeles without his sage advice.

Isiah: I had a mentor in college he was kind of like this nutty, crazy professor that everybody stayed away from, but this pulled me aside, and he says ” I saw you in a play last night I thought you were great. You got to get out of Minnesota, man goes to New York, and to start knocking on doors if you want to be a great actor you’ve got to start studying psychology. You’ve got to know the human condition.” That was some of the best advice I’d ever gotten in my life.

How has social media changed what you do?

Larry: Social media is just perfect for getting out. It’s a good way to talk to your fans. I love Twitter I respond to fans after my wife and kids have gone to bed. I think it’s cool that you can get replied to by a celebrity. If back in the day when I was coming up if I could go online, and my favorite baseball players or my favorite actors sent me a response, I would be a fan for life. I always try to stay engaged, as much as I can.
Nathan: I completely agree engagement is a fantastic word. It’s a way to engage with your fan base, that doesn’t revolve around work or any publicity due. It’s stuff that you’re entirely in control of, so you can personalize it as you wish. You can share, you can be personal with it or your private things you’re entirely in control. It’s nothing in between you and the fandom at that point, so you can engage with your fans, one-on-one, or just get a general idea of what everybody is about, but I love that word.

Lea a fan wanted to know, who do you like playing more: Miss Fritter or Boo?

Lea: That’s rough I’m gender fluid, so I’m going to say both. [LAUGHS] That was an adult joke. That is hard you know, but Boo pays a whole lot more, so I’m going with Boo.

Did either of you have any input on your characters, how they looked, the colors, or anything like that?

Lea: Miss Fritter, if she were here, I would say, she captures my essence. Completely!

Why did you want to play this part? (Lea DeLaria)

Why would I want to be Miss Fritter? Have we seen her? She’s awesome. I mean, come on. Her stop sign is a buzz saw. She’s terrific. Also, I grew up where they do stock cars. I grew up where demo derby was a big deal. I grew up in a really small town on the very tip of Illinois right by Kentucky. So that was like, Friday night entertainment for me. So the idea of being the queen of the demolition derby? Awesome. And they let me say the high school that I went to. A shoutout to that. That’s the side of the bus is the high school that I went to. Which is, the people of Belleville, Illinois, tiny little town, they’re gonna go nuts when they see that. It’s kind of awesome. And so when they came at me and said “do you want to do this?” I was like, “Yeah. I have a really good idea of how to play her.” And they were all in and it was awesome!Miss Fritter loves her wild life at the demolition derby. She is a large school bus that can be quite intimidating to the other cars. She is wild and crazy. Her stop sign is a razor blade! She starts off as quite the intimidating bully, but in the end I really fell for this character.

Larry, Nathan, Lea, and Isiah had the room on fire with laughter throughout the entire interview. This one of the interviews I will never forget. Cars 3 is now in theaters worldwide so check your local theater for details on purchasing tickets