I know you’ve seen the beautiful costumes worn by the Mrs in Disney’s A Wrinkle In Time recently I had the chance to meet Costume Designer, Paco Delgado. Who spoke passionately and creatively about the inspiration beyond each costume.  Paco Delgado is no newbie to the world of designing whimsical mind-blowing detail oriented costumes. He has been nominated for multiple Oscars as a Designer and won awards for Best Costume Design for the films Les Misérables and The Danish Girl.  He’s also well known for his work in the film The Skin I Live In.

Here’s what Paco Delgado shared during the interview about the unique and whimsical costumes in the movie A Wrinkle In Time.

“The first thing I always do is to read the script. You get some hints. For example, Oprah’s character was Mrs. Which she’s was a warrior that was fighting in the universe against the forces of evil. Originally, she was a supernova that exploded and became all this energy. We knew then and there that Oprah’s character had to be energy. Oprah’s dress that has the light took ages to make. Weeks and weeks and weeks!  We never found the right amount of electricity. It would work in a really dark room which would over-excite us. “Oh my God, this is amazing!” And the thing is, we went to show it to Eva in a normal room like this, it just did not work!”

Oprah’s dresses, they were complex, because we were using a lot of materials, but they are not.  Maybe something for her is used in in the past, but I never had used them before.  A lot of plastics, reflective metallic, fabrics, glass beads, and a lot of beads things that I never have used before wanted to play with energy as an idea. 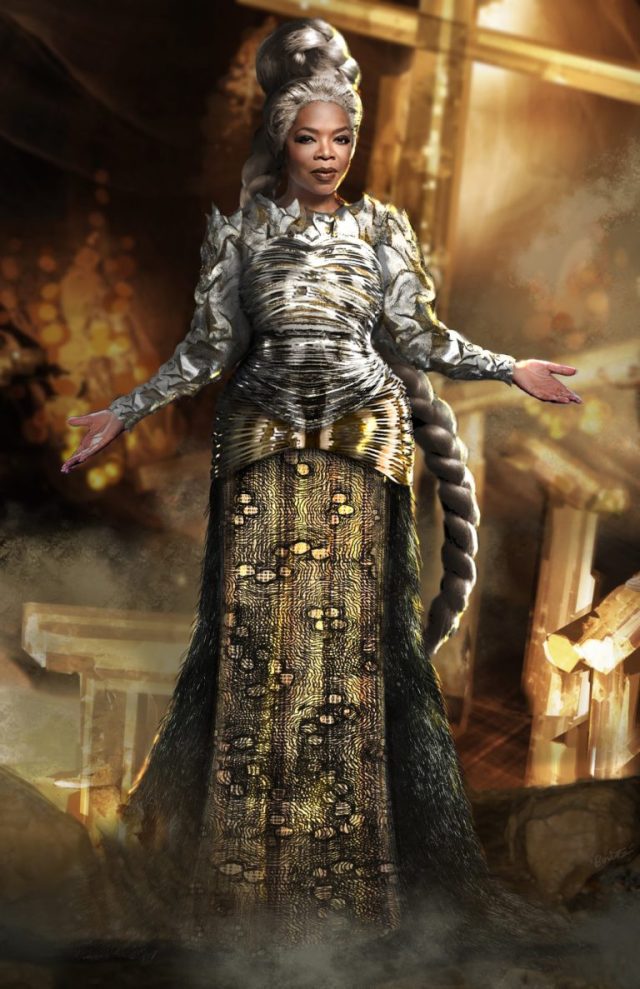 We started looking for fiber optics and then we find this company in China that they did these amazing fiber optics, and then we’ve imported things from them. Then they came here and they were really basically they didn’t work. Then we have to go through a difficult process we were trying different things and making a lot of mistakes.  Then for example,  Oprah’s dress that is had light up it took ages to make. I mean, weeks and weeks because we never found the right amount of electricity to say something that it could lead it from inside, and it could be seen in normal conditions. It was very scary!

My first meeting in my life meeting with somebody like Oprah Winfrey I didn’t want to say exactly what I felt. I was like oh my god, what happens if she doesn’t like this? You know, your thought get really creepy you don’t want to mess up with Oprah Winfrey. The thing is at the end of the day you have to put your head in a mind-frame to think that. She’s Oprah Winfrey for everyone including me, but now that I’m walking into her office, and I’m going to talk to her basically she’s my colleague. I can’t be scared because to be scared, the only thing that it does is paralyze you.

The Meaning And Creation Ideas Behind Creating Mindy Kaling’s Costumes Mrs. Who

Mindy was this super librarian so I thought that all her dresses had to have layers of things like book pages. I wanted to see if it was possible to make something with paper it was an ordeal to find the right paper, but we found these people in south LA that have this warehouse where they sell Japanese paper made by hand. In the beginning, we bought it in its raw stage. Then we tried to have our people who dyed materials try to see if they could dye it different colors it dissolved. Then we found another vendor and then it worked. That piece took at least three or four weeks nothing in this movie took less than four weeks. Some of the dresses took eight weeks, but also you have to think about what we were doing. Everything was worth doing and it was all being done simultaneously.  I thought in the back of the costume is a big Mandela.  I love the idea of a Mandela because Mandela is a western idea. She embodies so much wisdom.  You know, herself. She was, like, always so assertive in everything she said I love the idea of a Mandela.”

“I was thinking, you know, that you walk into the streets, and graffiti is amazing. I don’t think a lot of people have really stopped to think about it, but graffiti is an amazing artistic expression. It’s not just, making a drawing of a butterfly. It’s like saying a message.They don’t wake up in the morning they don’t have any porridge in the morning.  You don’t really know what they are doing because basically, it’s like, they don’t behave like human beings.  Oprah’s character has to be energy. She’s a warrior.  Then, Reese is very playful. You see the way she engages with the children and the silly things that she says to the children. She has to be interesting and fun. Then Mindy speaks with quotes from books. She’s a super librarian of the universe. She has all the cultures of the universe in herself. Then we can draw things from every culture in the world, like Japanese, African print, South American embroidery this is the beginning.”

From visionary director Ava DuVernay comes Disney’s “A Wrinkle in Time,” an epic adventure based on Madeleine L’Engle’s timeless classic which takes audiences across dimensions of time and space, examining the nature of darkness versus light and, ultimately, the triumph of love. Through one girl’s transformative journey led by three celestial guides, we discover that strength comes from embracing one’s individuality and that the best way to triumph over fear is to travel by one’s own light.

Meg Murry is a typical middle school student struggling with issues of self-worth who just wants to fit in. The daughter of two world-renowned physicists, she is intelligent and uniquely gifted, as is Meg’s younger brother, Charles Wallace, but she has yet to realize it for herself. Complicating matters is the mysterious disappearance of Mr. Murry, which has left Meg devastated and her mother broken-hearted. Charles Wallace introduces Meg and her fellow classmate Calvin to three celestial beings (Mrs. Which, Mrs. Whatsit and Mrs. Who) who have journeyed to Earth to help search for their father, and together they embark on their formidable quest. Traveling via a wrinkling of time and space are known as tessering, they are transported to worlds beyond their imagination where they must confront a powerful evil force. To make it back home to Earth, Meg must face the darkness within herself in order to harness the strength necessary to defeat the darkness rapidly enveloping the Universe.